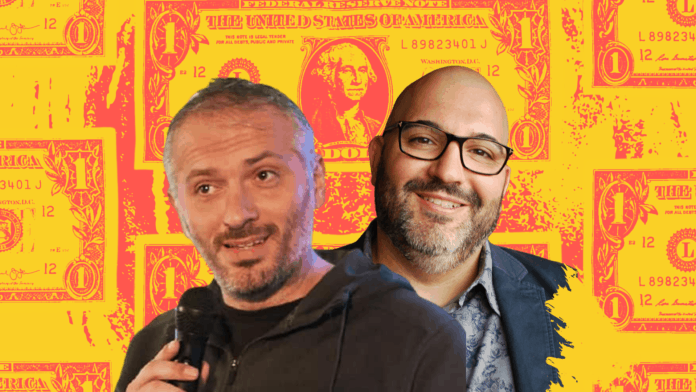 A Slice on Armando Biondi and Gary Amaral, Co-Founders of Breadcrumbs.io

It all started with a (successful) startup, where Armando Biondi and Massimo Chieruzzi teamed up as co-founders at AdEspresso. After a successful exit… enter, Gary Amaral. Described as a “function of serendipity” the trio founded Breadcrumbs.io, a revenue accelerator platform based on lead scoring. To date, Breadcrumbs.io has raised $5 million in funding from its seed round.

Biondi, with two other startups and exits under his belt, has now moved onto his third venture, Breadcrumbs.io. Amaral and Biondi met when they were working together at Hootsuite and after Amaral eventually left the company, the duo reconnected when they ran into each other in Dublin in 2019. Amaral then invited him to San Antonio to participate in a video series he was a part of. That same year, Biondi approached Amaral about the “startup life” and starting a company together.

As a first-time founder, Amaral recalls the learning curve he faced while navigating new responsibilities, like fundraising. “I think the secret weapons we had were having Chieruzzi and Biondi as co-founders because it made it much more compelling for investors to have a conversation when you have multiple time, successful leaders involved. The other is the way we’re distributed. It’s a massive advantage that we have people in various cities: San Francisco, Milan and Ontario.” Due to the distributed nature of the Breadcrumbs.io team, when COVID-19 struck, they didn’t miss a beat. Biondi notes they were already used to working remote way before the whole world had to adjust to it.

Even though remote work life wasn’t an obstacle the team faced, there have been challenges they’ve had to overcome. But for Amaral, value is the determination of inevitable risks. “The vast majority of startups are not runaway successes. So, financially, it’s like boom or bust which is an interesting dynamic. There’s so much more to it but there’s the experience you get that happens along the way like the intrinsic satisfaction of being a builder versus a cog in the machine.” Amaral views risk as relative and if there’s a learning experience that comes from it, it’s worth it.

As a serial entrepreneur, Biondi sees risks as a necessary part of the process. “If you don’t expose yourself to a certain amount of risk, you’re not exposing yourself to the opportunity for success. The amount or degree to which you’re comfortable with high risk opens you up for more success… Sometimes, it plays out and sometimes it doesn’t.”

“That’s the name of the game.”

Biondi still cautions entrepreneurs to not take “stupid risks” because that’s not the way you set yourself up for success. Instead, understand that part of being a founder is the “amount of waste” you must accept for the opportunity for upside.

Along with being comfortable with taking risks, Biondi shared his advice for young entrepreneurs stemming from his experience. He stresses that startups are more than just hard and that’s why most don’t work out. “It’s the most rewarding journey that anyone can take. This journey maximizes learnings and self-improvement. It comes at a cost so it’s not to say that everyone needs to do a startup or be a founder. But it’s rewarding and hard in that way.” Amaral shared his advice from his learnings along the way as a first-time founder. “I wish I had known that you’d intellectually understand that there’s going to be a ton of work. It’s going to be a slog and it’ll take time for that work to bear fruit. You don’t really understand that viscerally until you’re in it.” He advises young entrepreneurs to surround themselves with great people. The outcome might not always be what you want it to be, but from Amaral’s experience, the people he’s surrounded himself with have made the journey worth it.

Amaral’s vision for the future is not much different than Biondi’s. “I want to build the company that adds value to all of its constituents: the people that work there, the customers, shareholders and us as founders. It’s important to me to build something that creates value and a place where people want to work,” Amaral shares. For Biondi, the future is a never-ending journey of self-improvement and discovery while creating opportunities for everyone. Amaral and Biondi are aligned on values, ethics and goals for Breadcrumbs.io and will continue to keep learning while building a place that adds value.

Armando Biondi founded Pick1 and AdEspresso and served as Global Head of Growth Operations at Hootsuite prior to founding Breadcrumbs.io. He is currently Co-Founder and CEO of Breadcrumbs.io and serves on the board at MailUp Group. Biondi participated in the Y Combinator accelerator and resides in San Francisco. Connect with Biondi on LinkedIn.

Gary Amaral received his Bachelor’s in political science from Western University then attended George Brown College for Marketing Management and Financial Services. Amaral has since held leadership positions at Blackberry, Hootsuite and Chargify. He is now Co-Founder and Chief Product Officer at Breadcrumbs.io and currently resides in Toronto, Canada. Connect with Amaral on LinkedIn.